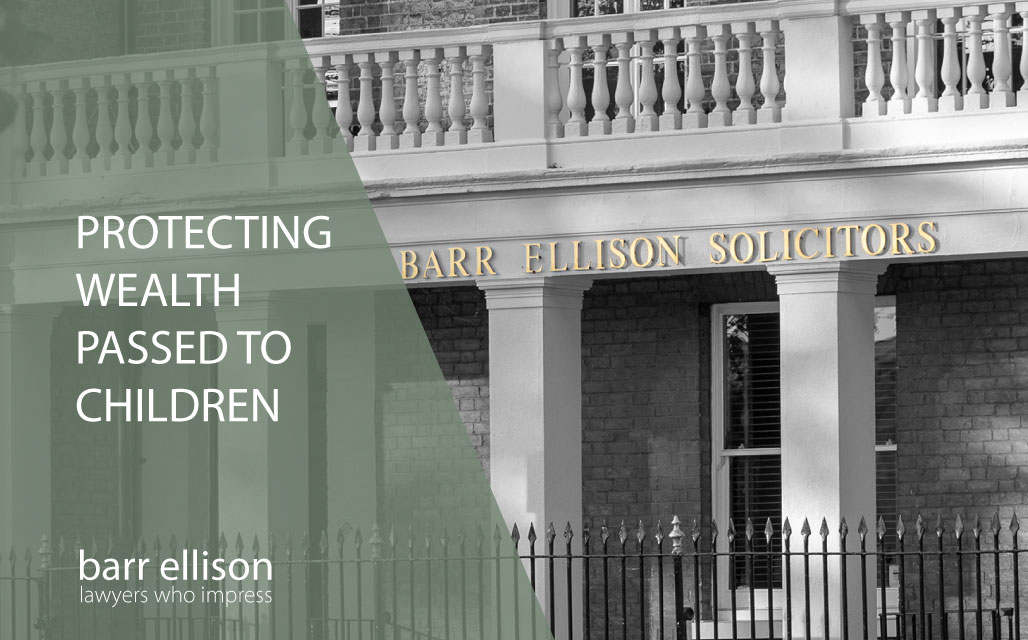 There are many reasons for passing money or assets to your adult children. It may be part of your tax planning, it may be sharing your good fortune or it may be the reality of being the ‘bank of Mum and Dad’.

When making a gift to your adult son or daughter it is important to understand that, if their relationship were to subsequently break down, that gift can become the property of their Partner, whether they are married or not. How can such gifts be best protected?

Most people are familiar with prenuptial agreements. If a parent has made a gift to an adult child, when a marriage approaches it can be a good idea for the recipient child to enter into a prenuptial agreement to protect that gift as a non-matrimonial asset. It can give an element of protection to that investment, for example as it goes forward into later properties purchased in the joint names of the couple.

A post nuptial agreement is simply a nuptial agreement entered into after marriage. For instance, where on downsizing in later life parents want to give an advancement of their child’s inheritance, recording this in a postnuptial agreement as the sole asset of the son/daughter is very important. Without any agreement, it could be treated as part of the joint assets of the couple on divorce.

Weight given by Courts to Nuptial Agreements

Although nuptial agreements cannot be the final word as the court always retains the right to decide what is fair in each case, they are now given considerable weight by the courts. Judges have said that there is nothing inherently unfair in an agreement making provision dealing with existing non-marital property (such as gifts from extended family) and there may be good objective justifications for it, such as obligations towards family members.

Money placed into the purchase or improvement of the family home is the most vulnerable to being lost on divorce and any nuptial agreement needs to be carefully worded to maximise the chances of successfully protecting that.

Any other assets, such as gifts of money, investments or shares can be more successfully protected by a nuptial agreement, particularly where those assets are retained in the sole name of the recipient. They can be ring fenced as non-matrimonial property and protected from the sharing principle often used by the Courts when dividing finances upon divorce.

Unmarried Couples: Declarations of Trusts and Living Together Agreements

Where couples have not married or entered into a civil partnership, the situation is usually more simple as (unless there are children) one person does not have any claim to the assets of the other.
Difficulties usually arise over the home where it is owned in joint names. Here any gift that has been invested in the property should be protected by a declaration of trust. This is a binding agreement which the court will follow, in the event that there is a later dispute between the couple.

For any other gifts, a living together agreement can be a ‘belt and braces’ approach.

You may decide to make a loan rather than a gift to your children. This will, however, have an impact in relation to inheritance tax as it remains the asset of the donor.
Additionally, most mortgagees will not lend if there is a loan agreement protecting part of the deposit so it simply may not be an option.

However where a loan agreement is possible, it will be acknowledged by the court, and the money protected by it cannot be taken as an asset available for division between the couple.