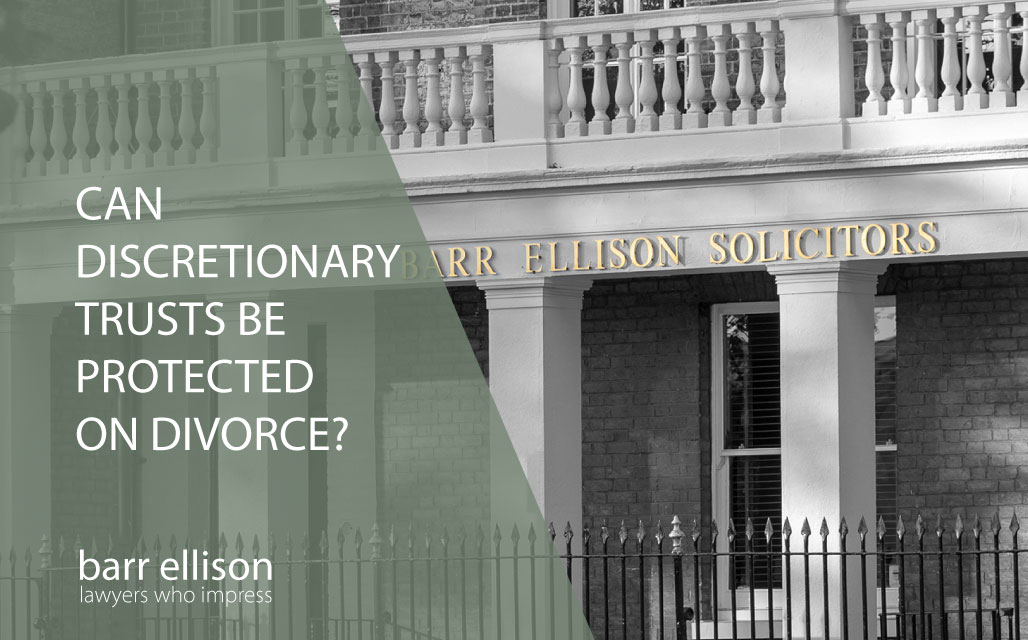 Can Discretionary Trusts be Protected on Divorce?

In the context of financial proceedings both spouses are required to make full and frank disclosure of their respective financial positions. For some parties, the concept of ‘full and frank’ is clear: they must disclose everything they have. For others, it can be more of a selective process. In a number of cases, one party or even both are beneficiaries under a discretionary trust.

Discretionary trusts are where the beneficiaries and / or their entitlements to assets are in a trust fund but are not fixed. They are determined by the person who set up the trust (the settlor). Where the trust is a testamentary trust (i.e. made in a Will), it is common for the settlor to sign a Letter of Wishes which relates to the exercise of the discretion.

So how are such trusts dealt with in divorce proceedings? It is quite common for the beneficiary of such a trust, be it the husband or wife, to say that such a trust should not be taken into account as they have no control over the trustees and, accordingly, have not access to the assets within the trust. The court, however, can take a different view and use what is called ‘judicious encouragement’ to persuade the trustees to exercise their discretion to assist the beneficiary, for example in releasing capital or property held within the trust for their benefit. The court will take into account the trust and look upon it as a potential financial resource. The court also will look at the reason behind the trust being set up, when it was set up and who in fact actually controls the trust (in particular if one of the spouses is not only a beneficiary but also a trustee). Is the anxious spouse simply hiding behind the trust in the hope that the court will disregard it and all of the assets contained within?

What the case law says

The case of Mr and Mrs Whaley addressed this issue. In that particular case, the husband’s father had set up one trust fund with the husband as a beneficiary. There was a second trust set up by the trustees of the first trust to move assets for tax reasons. The first trust fund owned shares in hotel owning companies and the second fund owned a golf course subject to a lease. The husband was not a beneficiary of the second fund. Yet the judge found that its value should be taken into account as the husband could in fact be added as a beneficiary at any time. The husband endeavoured to exclude assets from trust 1 by adding them to trust 2. The Judge took the view that the husband had control over these two funds to the extent that the trustees would do anything he asked them to do. It was not a question of the Judge placing undue pressure on the trustees to act in a manner which they would not have ordinarily done. The Judge was not prepared to simply exclude these valuable assets from the matrimonial pot, despite the fact that they were inherited assets. The wife received 36% of the total pot much to the annoyance of the husband.

Family trusts were also central in the well-reported case of Charman v Charman. The Court of Appeal in this case considered whether trust assets could be considered matrimonial assets. There were two trusts. One was set up for the children worth about £30 million and in which neither Mr nor Mrs Charman had an interest. The Court left this out of the equation.

The second trust, set up by the husband, was worth about £68 million. The husband’s case was that the trust has been set up to benefit future generations and therefore the trust should be left untouched. The Court of Appeal concluded that the trust had to be considered by the Court as a resource available to the husband. He was a beneficiary and if asked the trustees were likely to advance capital out of the fund to him. In effect, the Court said nice try Mr Charman, but when you have £68 million sitting in a fund, it’s not quite the same as  the money you have been saving up in your Christmas club book to splash out on the Christmas turkey.

Although the Court can treat assets in a discretionary or family trust as a resource that is available to the beneficiary, it does not follow necessarily that the other half can claim a share. The Court will look at what the matrimonial assets of the marriage are and divide them in the context of what could be made available to the husband or the wife if they are beneficiaries under the terms of a trust.