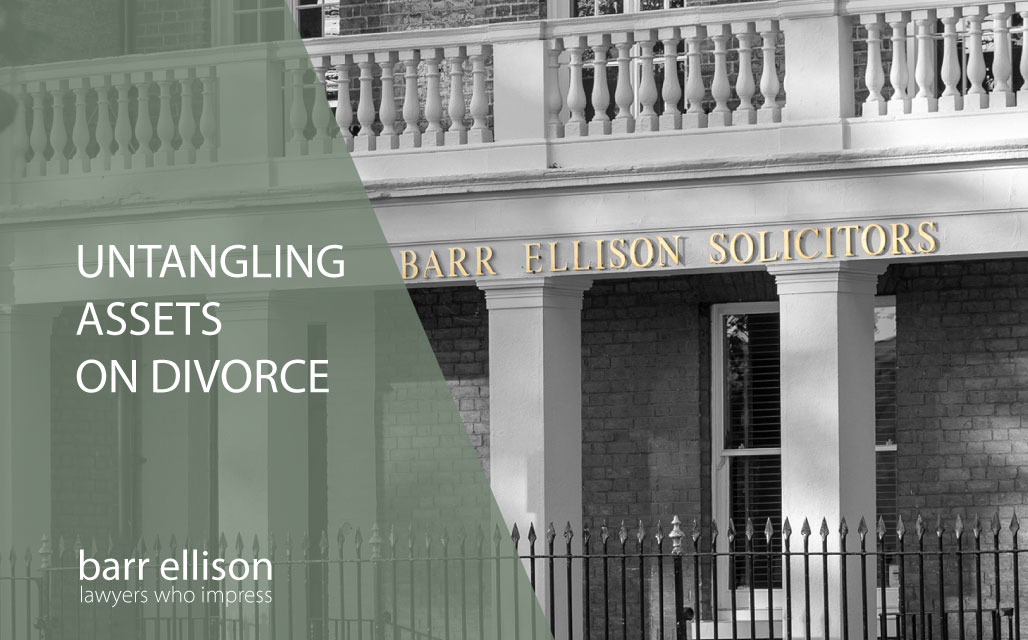 Divorce can be bewildering for clients. Should they try and sort things out with their partner? Or should they go to mediation or would going to court likely mean a better result? This is a massive decision and the needs of each client can vary dramatically. Clients need to feel that their situation is being managed and controlled effectively. It is they, not their lawyers, who have to live with the outcome of untangling assets on divorce.

Fairness is the golden thread

The central question is whether it is possible for the sharing of assets to be fair to both parties. Despite all the cynicism which can surround the divorce process, the concept of fairness is the golden thread that runs through all divorce cases. Fairness is of course a subjective test and – if the parties cannot agree what is fair – one upon which ultimately a court will adjudicate.

There are some elements of the divorce process which don’t help to prevent the adversarial approach rearing its head. We still have a fault-based divorce system so unless the parties agree to divorce after two years separation, one spouse will have to file for divorce on adultery or unreasonable behaviour. Thankfully the whole process of naming of the third party or co-respondent is now very much redundant.

It is good family law protocol to send the divorce petition to the other side first to read and to try and agree what should and should not be said about them. It can save a lot of unnecessary angst and bitterness if the divorce petition is drafted from the outset as sensitively as possible but with both parties in mind.

But this won’t always be possible. For example, where there are jurisdictional issues to take into account, it may be necessary to issue quickly and without notice, simply to get the proverbial legal foot in the door of the court of your preference. However, at the other end of the scale, amicable uncontested divorces can be fairly straightforward paper exercises, perhaps without any need to attend Court at all.

How to Begin Splitting the Matrimonial Assets?

The care of children aside, the most complex aspect of divorce is how to distribute assets and money. The first step is to know what is in the matrimonial pot. There are clients who know exactly the assets of the marriage. There are also those who may have left the financial management of the family’s wealth to their partner. Information and its gathering is crucial to achieving a fair outcome.

The law specifically requires both parties to make a full and frank disclosure of their assets, liabilities and income. This means details of all assets to include property, cash, investments, shares, pensions and any trust funds to which one may be a beneficiary.  Some seek to interpret the concept of full and frank disclosure in various ingenious ways, but this generally tends to prove unwise. The concept is not complicated: you state what you have and back it up with written evidence in the form of bank statements, valuations or other appropriate documentary evidence.

The existence of a family business can tend to complicate matters. The business may need to be valued, particularly if both parties are directors and shareholders. The goal is to untangle the parties’ joint finances in a manner which enables each to move on with their lives. Attempts at evasion are likely to be treated unfavourably by the courts. Experience demonstrates that the truth is generally exposed. Thus, it is either done the easy way or the hard way, with the latter seeing legal costs escalate as the family pot diminishes.

The judicial system takes a needs-based approach and, in the majority of cases, what the parties end up with depends upon their reasonable needs. The most basic of needs is for a home and an income. Where – if split equally – the assets of  the marriage will provide a home for both parties, then generally that is the right outcome. If, however, one spouse is the primary carer and is restricted in their earning capacity, they may require more than 50% to meet the basic need of a home for them and the children. In cases where one spouse is the higher earner, spousal maintenance may be appropriate again to try and achieve an outcome which is fair to both parties.

Amidst all of the above, any children of the family will be trying to come to terms with the fact that their parents no longer live together. How well the parents handle their divorce will have a profound effect on how well the children cope. An amicable relationship going forward will have a tremendous positive effect on the children. Our divorce procedure and law very much supports and encourages parents to sort out arrangements for the children together and with some degree of consensus to minimise damage to children. Court proceedings should not be necessary except where contact has broken down or there are serious issues over residence. To minimise the collateral damage of a divorce or separation you need the right legal team with the correct approach as applicable to your particular situation. 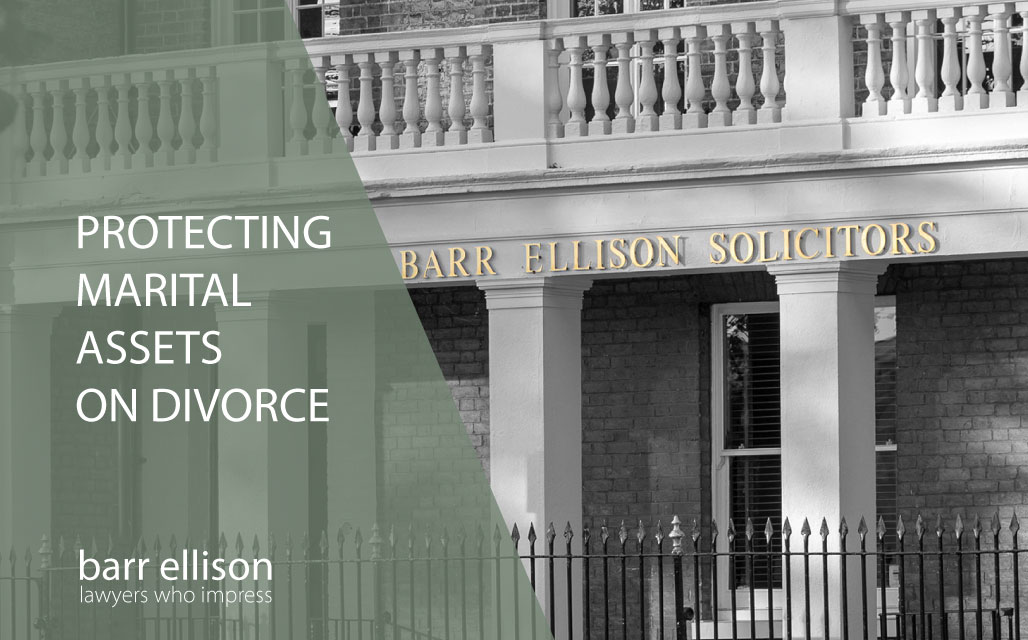 The concern for some people on being informed that their spouse wants a separation or divorce, is that money or assets are going to disappear and their first question to their lawyer is how to ensure that the money or asset can be preserved. If that is not possible, they want to be assured that it will be taken into account at the end of the day.

Where there is a real risk that an asset of value is going to be disposed of or in some other way removed beyond the reach of one spouse, then an application can be made to the court for an injunction preventing that, under s37 Matrimonial Causes Act 1975.

This application can be made without giving notice to the other person, if it can be explained to the court that time is of the essence, and that providing any amount of notice would enable the spouse to put assets beyond the reach of the court. However, when considering whether to grant the injunction, the judge has to consider whether there are other assets that remain available, from which the spouse who stands to lose the asset could be compensated. The judge also has to be satisfied that the actions of the spouse in dealing with the asset are driven by the desire to frustrate the other spouse’s claims. It cannot be an action that they would be justified in taking in the normal run of their affairs.

Any injunction made without notice to one spouse has to come back before the court quickly for a further hearing with both parties present, permitting the judge to consider whether it is necessary to continue the prohibition. The injunction can be discharged in full or in part, and the spouse who made the initial application could be penalised in costs if the court takes the view that it was an over reaction and the claims are not justified.

Can missing assets be added back?

What if the money or asset has gone? Can it be added back in when the final financial division is being dealt with?

It could be said that the courts have placed the bar very high to accomplish this. The judges have pointed out that granting any ‘add back’ does not recreate any actual money. In truth (they say) it is a process of penalisation. However, it can work to depress what the spouse would otherwise have been entitled to. As Cairns LJ said in the 1976 case of Martin v Martin
“a spouse cannot be allowed to fritter away the assets by extravagant living or reckless speculation and then to claim as great a share of what was left as he would have been entitled to had he behaved reasonably”.

The case of Vaughan v Vaughan introduced the idea that to succeed the dissipation has not just to be proved but it has to include a ‘wanton’ element. That means it has to be deliberately reckless, and cannot include spending on a party’s reasonable needs, such as housing.

In the case of MAP v MFP (2016), Moor J found that the husband’s spending on drugs and prostitutes of £6000 a week was not deliberate or wanton in this sense, although it was described as ‘morally culpable’. The judge found that this spending was part of his character and had not taken place with any intention of reducing the wife’s claim.

In the same case, the husband dismissed the wife from her employment within the company which meant that she lost her ability to claim entrepreneur’s relief on her shareholding in that company; that relief would have been worth around £271,000. This was taken to be a deliberate and wanton act as there were other ways the husband could have addressed the wife’s behaviour within the company. However, it seems unlikely that denying the wife the right to claim entrepreneur’s relief was even a consideration for the husband in choosing to dismiss her, so this decision of the judge does not lie was easily with the requirement that there has to be an intention to defeat the wife’s financial claims in the divorce.

Weighing up an injunction vs costs risk

Given the difficulties with succeeding in an “add back” argument, it seems more likely that people will use the s37 injunction procedure. However, the spectre of a costs order is a significant deterrent. A party’s best hope is that whilst some money or assets may disappear there will be sufficient remaining in other non-moveable assets, such as property or even pensions, to compensate for the money lost. The focus is then on establishing what was there and that it has been within the sole control of one spouse to remove it. Running this line of argument is, however, only worth it where the overall asset base exceeds the needs of the parties and their children.