How Personal Injury Compensation is Calculated 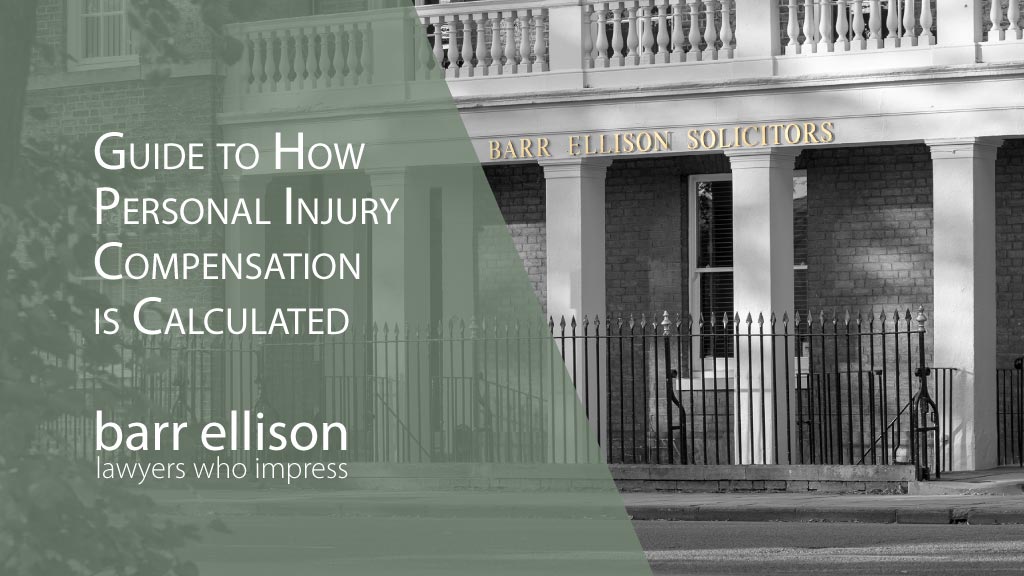 Often at the outset of a personal injury claim the value of the claim is the last thing on anyone’s mind. The focus is, quite rightly, on the treatment and rehabilitation of the injured person in order that they make the best possible recovery. Instructing a specialist solicitor as early as possible ensures that all avenues to rehabilitation are considered, including privately funded treatment through any injury claim.

However, once the initial stages of the litigation and the rehabilitation are dealt with, it then becomes necessary for the quantification of the claim to start to take shape. When looking to value a personal injury claim, there are 3 areas of loss that must be considered:

The award for General Damages is based on the injury suffered, the duration of any symptoms and the impact those symptoms have had or will have on the injured person. In assessing the award for General Damages, the Courts will refer to the Judicial College Guidelines for the Assessment of General Damages in Personal Injury Cases which sets out brackets of awards for common injuries, as well as the awards made in previous cases involving similar injuries. Both provide guidance on the appropriate starting point for the award.

As no two injuries are exactly the same these are guidelines only and each claim must be valued on its own unique facts. As an example, if two people suffered the same serious spinal injury from the same accident but one is 18 and the other 65, it is likely that (all other aspects being equal) the 18 year old will receive a higher award for general damages as they will have to live with the consequences of the injury for much longer. Similarly, if two people suffered the loss of one leg as the result of an accident, but one was a keen footballer and the other preferred to play video games in his spare time, the footballer may be entitled to a higher sum for general damages on the basis that they have lost the ability to continue doing something they particularly enjoyed at the same level. Each case and each individual is different and the general damages award should reflect these nuances.

Awards for General Damages are intended to compensate the injured party for the injury itself. Financial compensation can only go so far and can obviously never fully compensate for the pain and suffering endured by an individual and their families.

In addition to the award for General Damages, Special Damages are categorised as the financial losses suffered as a direct result of the injury. This can include a wide range of financial losses including any loss of earnings, the cost of treatments and therapies, the cost of employing support workers and case managers, items lost or damaged in the accident, aids and equipment, accommodation and adaptations to a property, to name but a few. If the injured person suffered a serious brain injury and now lacks capacity to deal with their own affairs, then the cost of appointing a Deputy would also be included within this claim.

The above examples are by no means exhaustive. As with General Damages, every case is unique and every claim will have its own unique considerations as to what is recoverable as a loss.

Loss associated with Special Damages can be split into two periods: past loss and future loss.

Past losses are those Special Damages which accrue from the date of the accident to the date of trial or settlement. They will be itemised as the case progresses and can include a wide variety of losses and expenses. There is often also scope within the claim to recover the expenses incurred by friends and family members who assist with recovery and rehabilitation. Any time spent caring for the injured person can also attract compensation payable to the carers even if they do not charge for their service (in the case of family members, for instance).

Evidence needs to be obtained to support any losses and this can be gathered as the case progresses from various sources. Expert reports will be obtained setting out the extent of any treatment received and care provided. Witness statements may be taken from care providers, friends and family. HMRC tax records or employment records may be gathered to support the loss of earnings claim. Only once all of the evidence is available will your solicitor be able to properly assess the value of past losses.

Future losses are those losses which the injured person will incur in the future, after the claim has settled. The extent of these losses will be determined largely by the expert evidence which will identify any ongoing needs, as well as the possibility of future treatment and/or surgery that may be required. If a care regime is in place at the date of settlement, then evidence will be required to clarify for how long this will be needed, and whether the requirements will change in the future.

In cases where the injuries have affected the life expectancy of the injured person, their future losses will be likewise limited by this reduction.

The types of loss are generally the same as those for past loss, and the same evidential burdens apply. The evidence gathered will need to show what is required, when it is required and for how long so that a calculation can be presented to the Defendant showing how much money will be needed in the future. There are a number of additional factors taken into account when calculating these losses such as when the money will be needed, the anticipated interest accruing on the money before it is needed and what is the likelihood of the money being required at all.

Once all of the above is factored in, figures for future loss can then be calculated accurately. However, these calculations are complex and are often a point of contention between the parties.

Value of the Case

The value of a personal injury claim can vary significantly based on the specific facts of the injury and the injured person. Each case is different and should be approached as such. This is why instructing specialist solicitors is vital in maximising the value of the case and making sure that all losses are evidenced, supported and ultimately recovered.

The Legal 500 recognises Barr Ellison as a Tier 1 personal injury law firm in their most recent rankings.