Wealth Protection and Nuptial Agreements are not just for the Rich 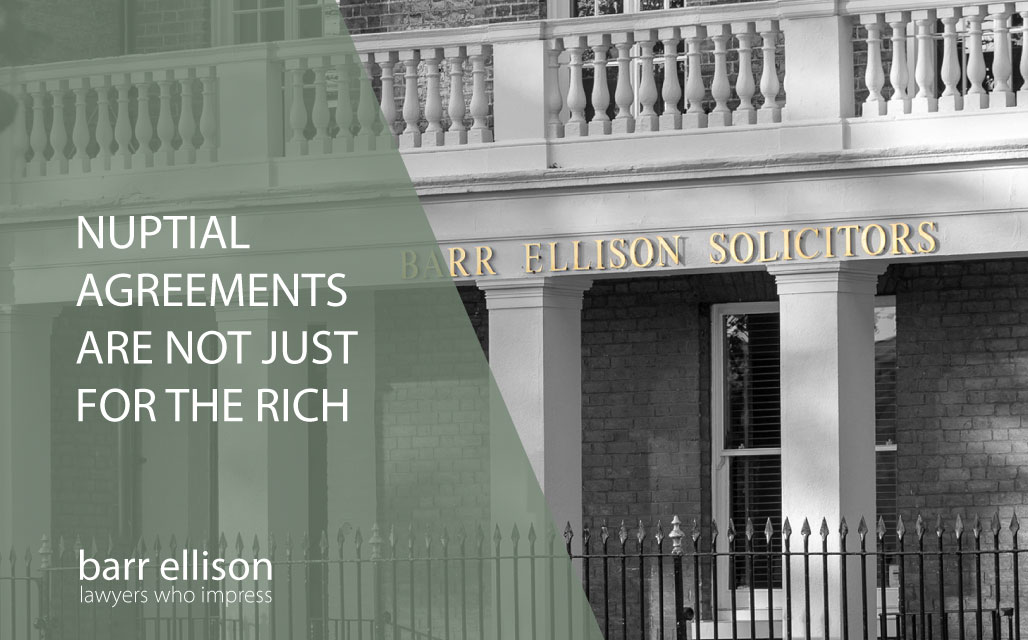 Many people dismiss mention of nuptial agreements as not being relevant to them, the preserve of the rich and famous with their surplus of wealth and assets. This is certainly not the case.

Statistics show people are marrying later: the average age for a woman to marry is 28; for a man it is 30. (Only 30 years ago, it was 23 and 25.) Those embarking on married life have therefore had more time to establish careers, start pensions and buy homes, thus individually entering into marriage with more wealth.

Those subsequently divorcing are often in their 40s. Many will go on to marry again, bringing into those second marriages homes they want to protect and children for whom they wish to provide. Others may have received a large gift from parents or an inheritance, or perhaps significant share options through their employment.

Nuptial agreements have a significant impact

The reality is that nuptial agreements, whether entered into before marriage (prenuptial) or after marriage (post nuptial) can be a powerful mechanism for those who wish to protect their assets. When these agreements have come before the courts the focus has been on the parties’ right to set their own terms. Lord Philips stated in the groundbreaking decision in Radmacher that:

Nuptial agreements are therefore about two people agreeing how they would wish to deal with their financial resources in the event their marriage were to breakdown.

How to approach a nuptial agreement

You will likely have heard that nuptial agreements are not automatically binding on a court. If you understand why this is the case, then this is helpful in guiding couples in how to approach entering into a nuptial agreement. In essence, the parties to a nuptial agreement cannot force a judge to make an order that they do not think is fair. This is an important protection the court retains: it means the courts can say no when they are asked to approve a settlement which clearly makes entirely inadequate provision, or where someone has been misled, coerced or simply misunderstood what provision would be fair and reasonable for them in the circumstances. It would be fundamentally wrong for the courts to have no choice but to endorse a settlement which is wholly inadequate.

Influence on the court

But that does not mean the court will not hold the parties to the agreement if it thinks that is the right outcome. Parties entering into such agreements will usually expect as a minimum that the courts will give considerable weight to the terms of a nuptial agreement. Even in circumstances whereby the parties may not be held to the original terms of a nuptial agreement, such agreements can and do influence how a judge would determine what is fair.
In the case of V v V 2012 Judge, Charles J stated:

So, with this change in stance and a general acceptance that such agreements can lead to a different result, the courts have expectations about how the parties will go about entering into such agreements.

Expectations of the Court

The courts expect there to be safeguards in place to avoid a weaker party being coerced or simply tricked. This will often mean that the agreement should be prepared in accordance with the recommendation set out in the Law Commission, which states that such agreements should:

The exception referred to in the 3rd bullet above is that the court can still impose their own view if the agreement leaves either party without provision for their financial needs. However, even when the court is persuaded that it is not bound by the agreement because it does not provide for a party’s needs, the agreement can still be relevant as it can operate to influence what a court would consider is a fair outcome, reducing the provision the court makes from what it otherwise would have been.

Postnuptial agreements have increasingly become a useful device, particularly in respect of gifts from parents to their married children. Parents may wish to make a gift to their adult children as part of their inheritance tax planning, but would want that gift protected in the event that their child’s marriage were to breakdown, ring-fencing the gift for the benefit of their child or grandchildren.

Nuptial agreements are not for everyone. But it is an option for all couples to consider; it is about being in a position to make an informed decision about what is right for you. For those going into second marriages, prenuptial agreements can offer considerable protection when drawn up correctly. For parents wishing to pass on family assets to their married children, the postnuptial agreement can help ring-fence funds for their children and grandchildren.