Why a decree absolute (final divorce order) is never enough 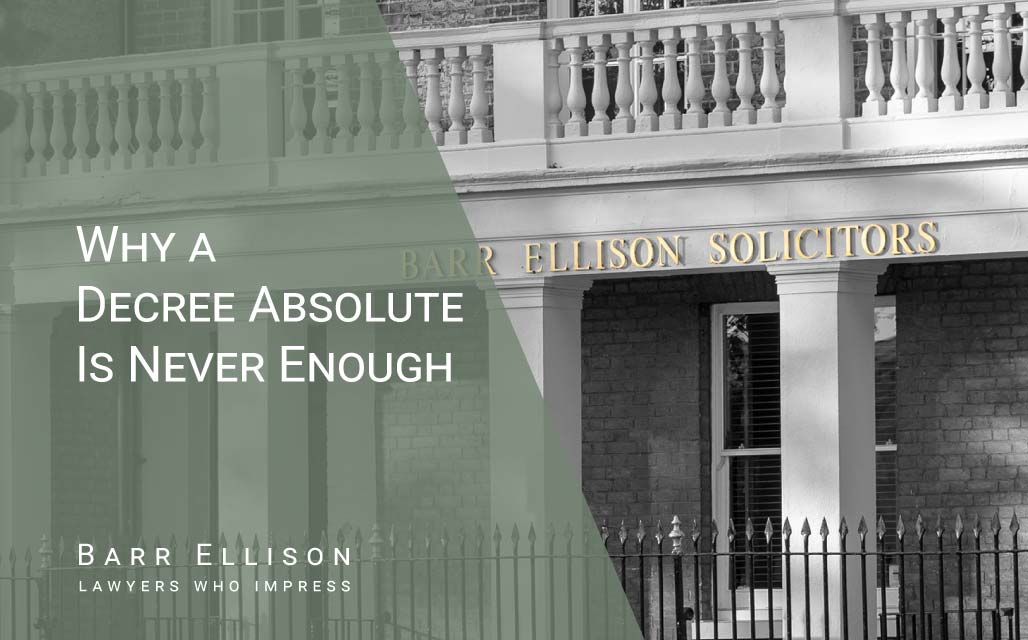 It is a common misconception that obtaining your Final Divorce Order (formerly Decree Absolute) brings matters to an end as regards divorce. This creates the impression that it is the last step and that there is nothing more to do.

See article Guide to Getting Divorced

Is there a financial order in place?

That is not always the case.  For those couples who have delayed the application for the final divorce order until they have obtained a final financial order from the court, they can rest assured that it is indeed the final and there is nothing outstanding.

However, for couples who have not addressed finances at all it is a different story.  To some extent the online divorce process feeds into the belief that there is nothing more to do by asking the question when the divorce petition is being submitted “Do you wish to apply for a financial order?”  If the answer is no, then it seems logical to assume that is the end of the matter.

But in reality no one should ever answer no to that question. The court should always be asked to make a financial order, because without that each party’s financial claims against the other remain alive. 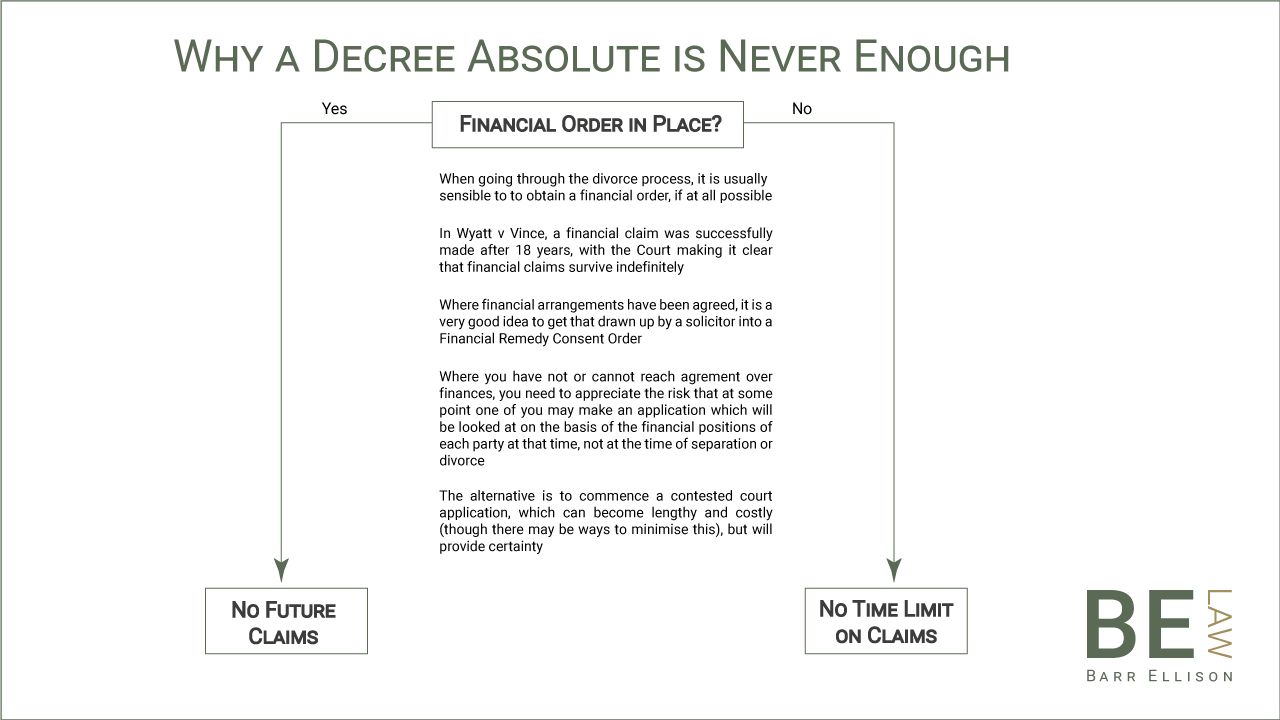 If one party after the divorce remarries, this can limit the financial claims that can be brought arising from the first marriage but by no means completely eliminate them.  If you are in that position, you should seek advice from a solicitor who will want to know if you were the petitioner or respondent and what you answered to that question about a financial order.

No time limit on financial claims

There is no time limit on financial claims arising from a marriage and they are not extinguished by the grant of a final divorce order alone. If they are brought many years after the divorce, then the court can take into account there has been a delay but it does not rule out the claims being considered.

The seminal case proving this was Wyatt v Vince where the parties had divorced 18 years previously at a point when they were both relatively poor.  The wife remained poor but the husband made a fortune in wind farms.  The wife applied for financial provision for herself and the children and the husband tried to get her claims dismissed without a hearing, due to the time that had passed.  The courts made it clear that financial claims survive indefinitely.  The parties then settled so the court did not rule on how far the delay should affect the claims.  It was relevant in this case that the children had suffered from the relatively poor circumstances of the wife and the husband could have done more to address that at an earlier stage.

In the case of A v B, the former husband’s claims made 26 years after the divorce were not successful.  The Judge in this case found that the parties had reached a financial agreement and the wife had made provision for the husband, from which he had benefited.  However, you should be cautious in simply relying on the financial division agreed between you at some point around or after the divorce as being the answer to defeat a later claim.  The court will look to see if the claimant’s needs have been met by that division and, if they have not, then there can be what might look like a second bite at the cherry.  However, it is simply the court reflecting its view of fairness which they would have done had the approval of the court been sought to the arrangements at the time.

Obtain a Consent Order to reflect any agreement

So if you have an agreed financial arrangements, it is a very good idea to get that drawn up by a solicitor into a financial remedy consent order.  The application for an order must be accompanied by a statement of financial information for each party and this can be done as one document.  It is fairly basic and requires no supporting documentation but gives the Judge an idea of the financial background.  This is also now submitted online by a solicitor.

If you have not, and feel you cannot, reach an agreement over finances, then you simply need to appreciate the risk that you are taking that at some point in the future one of you might make an application which will be looked at on the basis of the financial positions of each party at that time, not at the time of separation or divorce.  There can be arguments about post separation accrual but if the claim is based on needs, then the court is not going to be persuaded to discount wealth that has come into being after the divorce.

The alternative to taking that risk is to commence a contested court application.  Again it is wise to take advice on this as it can become a lengthy and costly exercise, though there may be ways to minimise this.  You can be certain that placing the matter before the court will result in a final outcome so that your final divorce order and financial order really do mean the end of the matter.