Is Wealth of Extended Family taken into Account upon Divorce? 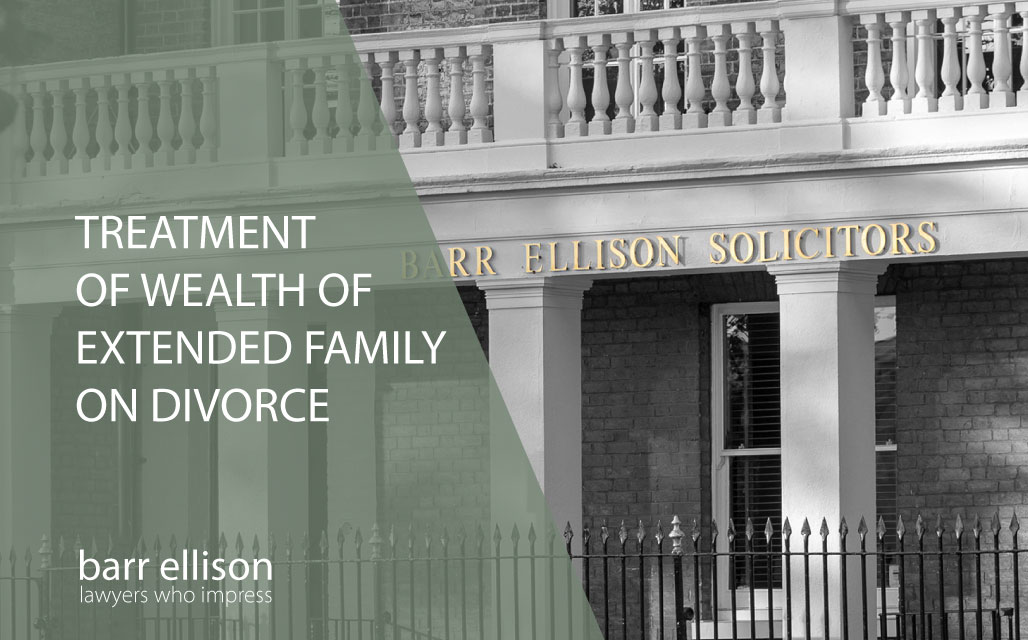 It is not an uncommon situation that the extended family can be significantly wealthier than the couple who are separating. Where the wealth is exclusively on the side of one spouse, surely that must be relevant when it comes to looking at dividing the couple’s wealth between them?

We need at look at different ways in which this might happen for a divorcing couple:

Sometimes, the parents of one spouse can have provided assistance to the couple during their marriage and the other spouse wants to argue that this is likely to continue to be the case, so it should be taken into account when considering how to divide up the capital assets or even when considering any claim against income.

The general starting point for any Judge considering the matter is to say that parents or wider family members can make their own decision as to how to gift their money and the court cannot legally require them to make such payments. So unless the parents are making it clear that any  regular support will continue, or that they are offering to financially help one of the parties to the divorce, for example to get them back on the property ladder, the Judge is not going to assume that they will provide ongoing financial support.

There is a difference between the wider family coming forward to support, which a Judge can take into account, and the family making no such promise or even stating that they will not assist, when the Judge cannot take into acccount.

Due to the lack of automatic rights of inheritance under English law, the court will not take into account provision under a Will for someone who has not yet died.  If the person bequeathing the assets now lacks mental capacity, it might be possible for the court to accept that money is to come to one spouse but there is then a question of timing, and whether the funds available will reduce, most usually through care costs.

In the case of Alireza v Radwan and others in 2017, it was argued that the wife’s future inheritance from her father should be taken into account by the court as a resource that she was likely to have in the foreseeable future because she was from a Saudi Arabian family where forced heirship rules apply.

The Judge who initially considered the claim, took into account actuarial tables with a view to establishing the life expectancy of her father, which was assessed at a further 16 years. The initial Judge took the view that the wife’s future resources taking into account her guaranteed inheritance could be used to repay the housing purchased for her and the children, despite it being clear that the husband had sufficient money to fund this for her.

The decision was appealed and the Court of Appeal ordered that the wife should have a further sum to buy a house in her own name outright, even though there was a guaranteed inheritance.  Part of the court’s thinking was a need to respect the wife’s autonomy and not leave her in the hands of a series of men, financially reliant on her husband, then her father.  The Judges took the view that the wife should be provided for, to give her financial independence from the resources of the marriage rather than a future inheritance.

This case gives a clear signal to couples that it is unlikely to increase one person’s share of the family pot, by pointing to what might (or even will be) coming to the other spouse from  their wider family.  Unless there are nuptial trusts that are capable of being varied, the court has to work with the income and capital that the parties have, not what they might have in the future.