Is a house purchased before marriage a marital asset? 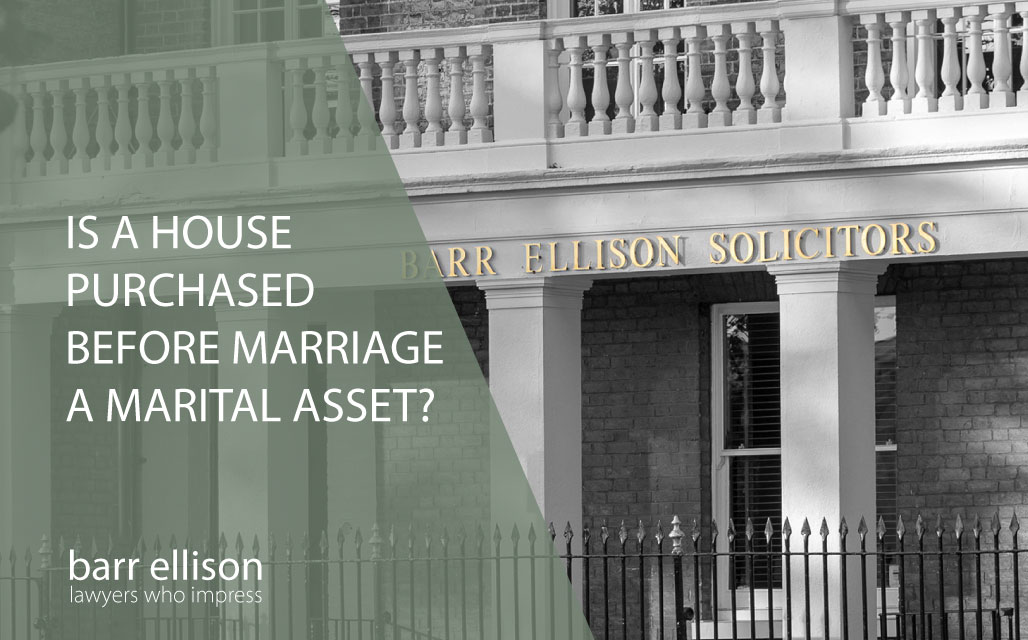 The answer to this question in most cases is, yes, if it has been at any time the family home.  The relevance of this is that, as a marital asset, it is subject to the sharing principle (see Financial Provision in Divorce Cases).

When looking at how to deal with the claims of any couple on divorce, the court (and a solicitor advising outside of the court process) is governed by section 25 of the Matrimonial Causes Act 1973.  This lists the matters that the court has to take into account.  At the top of the list is the needs of any child under 18 years, followed by the needs of the parties, the resources they each have jointly and separately, their ages, health, the length of the marriage and the standard of living they enjoyed together.  The “sharing principle” is not found in this list but is a judicial gloss and a principle that can be quite strictly applied to marital assets.

So if a house is found to be a marital asset, the starting point is that it is should be shared equally between the spouses.

The Judges have been clear in a number of cases that a house that has been the family home is to be treated as a marital asset whether it is owned by one spouse or it is held in joint names.  If it is owned in the sole name of one spouse who has been the sole investor in the property, there can be an argument about unmatched capital contribution coming from that person but it is unlikely to significantly move the court away from the principle of an equal division

Never been the family home

If it is a house that the parties both owned in joint names before the marriage, regardless of the amount each person contributed, it will be treated as an asset to be shared equally between them.  If there is in place a Declaration of Trust which sets out different shares as between the couple, then the court may give that some weight but it does not bind the court and a judge is free to impose his own view contrary to the terms of the trust.

If the house is owned solely by one spouse, then there are other factors to consider, the most important of which is the source of funds.  Where a property has been acquired before the marriage but within the period of the parties’ relationship, the court can still treat it as a marital asset, where the parties have both contributed to the purchase, even if they have done so unequally.  This can apply where one party’s contribution is not represented by money but by work to the property or by freeing up the owning party to earn and accumulate savings, say by being responsible for childcare.

However if the source of funds comes from outside the parties’ relationship, particularly from an inheritance or family gift, then there are good arguments to say that it is not a marital asset.  It can be important to show that any income generated from the property has not formed part of the family spending but has been retained by the sole owning spouse.

With couples marrying later in life, it is more likely that a person might have their own property, owned in their sole name.  If this is retained, and not used as the family home but rented out, it can be possible to keep it out of the marital pot. However, where some people encounter problems is by using that solely owned property as security for borrowing that is then used to fund a joint purchase or a separate solely owned home that is then the family home.  This is known as mingling and pulls the solely owned property into the ambit of marital property.

However whether or not a property is a marital asset becomes much less important in cases where the needs of the parties and any children require the use of that property or the money it represents.  At the top of the section 25 factors are the needs of children under 18 and the needs of the parties and if those needs cannot be met without recourse to the house, whether family home or not, the fact it was owned just by one spouse before the marriage, falls away.

Protection of a Prenuptial or Postnuptial Deed

Whilst stating in a nuptial agreement that a property is not to be treated as a marital asset, and therefore not subject to the sharing principle, it does not remove absolutely the ability of the court to come to a different decision.  A nuptial agreement can make a significant difference and, provided there has been thought given to how the needs of the non-owning spouse and child(ren) may be met, it can be effective at deterring or indeed defending a sharing claim.