Is Cohabitation Grounds for Maintenance to End? 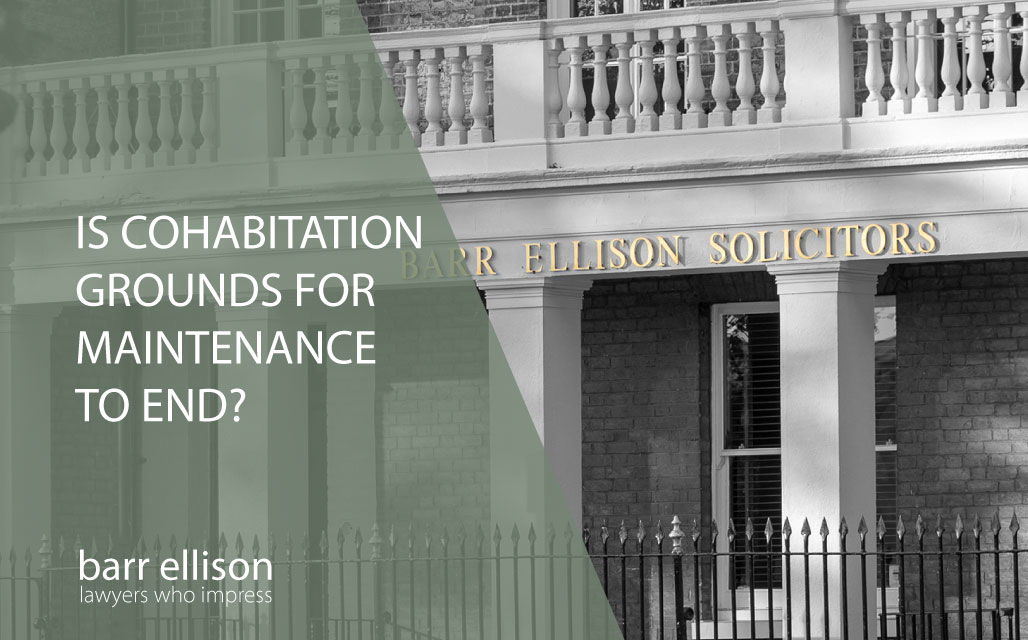 The payment of spousal maintenance is often a tricky issue in divorce cases. It becomes even trickier when the receiving party, usually the wife, starts to cohabit and the husband feels that it is not fair that he should be expected to continue to support his ex. Is the fact of cohabitation grounds for the maintenance to come to an end and the wife’s claims dismissed once and for all?

As the law stands, if a wife has a spousal maintenance order, it can take the following forms:

All spousal maintenance orders end on the remarriage of the recipient. They do not end automatically by law on cohabitation. A term order can be worded on the basis that, once the term has expired, the wife is barred from applying to extend that term.

It is unusual to find an order that states the maintenance will end on cohabitation as it is unlikely that the wife would agree to such a condition.

Cohabitation may be a catalyst for variation of an Order

The fact of cohabitation can be the catalyst for the husband to ask for the maintenance to be reviewed or indeed terminated. If the wife does not agree to her maintenance ending (which is usually the case) then the husband will have to make an application back to the court for a variation of the original order. The court has to consider all the ‘circumstances of the case’ and the fact of cohabitation has to be taken into account. The court also has a duty to consider whether there should be a financial clean break between the parties.

However, the court has to look closely at the financial circumstances of the new partner and what they ought to contribute to the household. If the new partner is impoverished and has no job then it follows that their contribution is going to minimal. However, the court can infer a notional income based on what it is likely he would be earning if in work. That said, the court has to consider the credibility of the evidence of the earning capacity. There may be an implied criticism of the wife’s choice of partner, but that in itself does not mean that she should be cut loose from the financial support of her former husband.

The case of Grey and Grey (2009) tackled this issue. In brief, the case involved a wealthy couple. The marriage had lasted 10 years and had produced one child. The capital assets were divided equally and the wife was awarded maintenance at £100,000 per year. The husband was not at all happy with the award and appealed citing that the wife was in an established relationship and was cohabiting. The wife denied she was living with her new partner. The husband, undeterred by the wife’s protestations, hired a private investigator whose report concluded that she was living with this chap. No evidence was produced of the partner’s financial circumstances. The husband’s appeal was allowed and as to the nature of the variation the matter was dealt with by the court that made the original order. The court subsequently directed itself to the following questions:

In the Grey case the wife’s maintenance was not dismissed. What the Judge did was to increase the child maintenance from £16,500 to £27,500  and reduce the wife’s maintenance by the same amount. The court attributed an earning capacity for the new partner of £16,500. The husband’s earnings at the time of the re-hearing were £1.3 million gross with an expected bonus of £1 million.

On an application for variation the court can consider capitalising the wife’s maintenance i.e. paying her a lump sum to achieve a clean break. If this is an option, first the court would consider whether the original order should be varied downwards and then a formula is used to calculate what would be an appropriate lump sum payment.

In the interesting case of Dixon v Marchant (2008), on application by the husband for a variation he agreed to capitalise the wife’s maintenance in return for  a clean break. The wife said that she was not cohabiting and did not intend to cohabit. However, seven months after she received the lump sum, she married her partner. She said at the time the Order was signed off, she did not expect to re-marry. However, her partner proposed to her out of the blue and she accepted. The Court refused the husband’s appeal and said that the lump sum payment was not contingent upon the wife not re-marrying i.e. she did not have to pay any of it back. The risk of her re-marrying after payment was one the husband had accepted.

This decision may seem harsh on the husband, but then again the court cannot legislate for every eventuality. It is important to remember that at the heart of each divorce case are very personal issues and one size does not fit all.

These are some important points to consider: