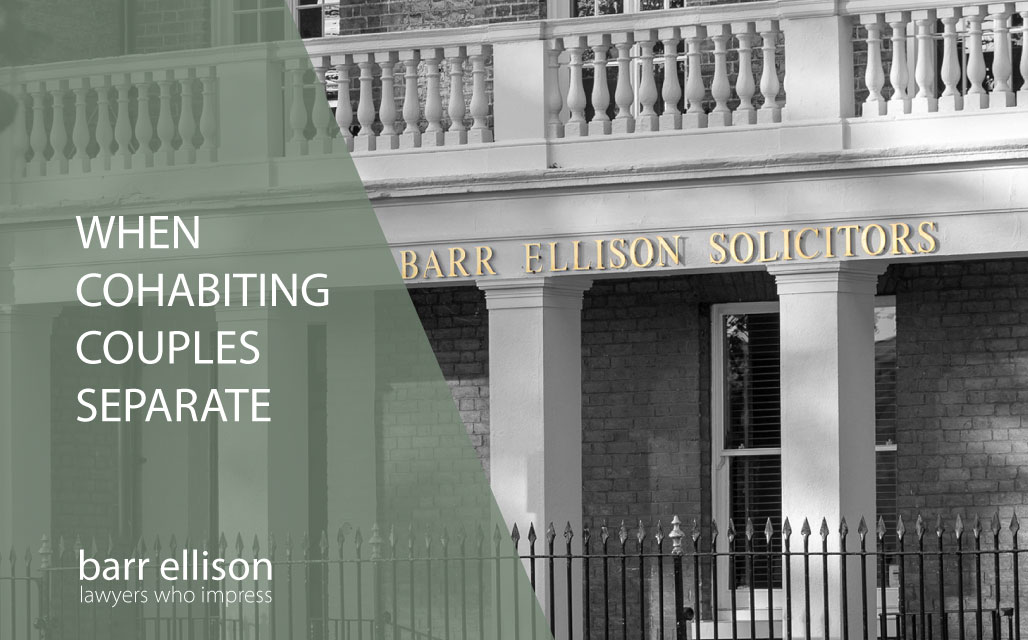 The piece on Property ownership for cohabitees – common myths exposed sets out the common misconceptions people have concerning their legal status when they cohabit. Here we address what can be done to avoid problems when cohabiting parties separate. Note that there have not been any recent major changes of the law in this area. Cohabitees continue to have limited rights in comparison to married couples or those in a civil partnership. Many are hoping for primary legislation to redress the imbalance – but there is no sign on the horizon that our current Government has any wish to tackle this.

Buying a house together – what are the options?

A house is probably the biggest single item anyone will purchase in their lifetime. The critical question is: should this house be bought in the parties’ joint names or in the sole name of one? To keep it simple there are basically two types of joint ownership:

If at the outset there is an unequal contribution to the purchase, the property should be held as a tenancy in common with a Declaration of Trust tacked on to record the parties’ respective shares. If the property is purchased in joint names the division is generally going to be assumed to be 50:50, even if one has contributed more than the other. There is a presumption in the absence of fraud or mistake at the time of purchase that the parties intended the beneficial ownership to be equal, and claims to the contrary after the event are unlikely to change that.

What if the house is in one person’s name only?

This is often where disputes arise, for example the parties initially bought the house together and for whatever reason it was placed in one party’s name or one party may have moved into a house already owned by the other. In these cases the burden falls on the non-owning party to prove they have acquired a beneficial interest in the property. How is this done?  The party claiming an interest has to prove that there was an intention that the property should be in shared ownership. This has to be based on evidence to establish that a Trust has arisen either from conversations the parties had and / or by reference to the contributions made by the parties both at the time of the purchase and subsequent to it. The whole ‘course of dealings’ between the parties will be scrutinised. This does not boil down to ‘well I paid for the food and holidays and he paid the mortgage therefore I should be entitled to a share of the house’. The contributions need to be made to the mortgage or to the property and the intention to share has to be there.

We lived together for 20 years and had 2 children – surely I should get something?

The short answer is probably not, if there was no intention to share, no contribution towards the purchase of the property or to the mortgage payments and no major financial input into the property. In this situation, there will be no day of reckoning for the party whose name is absent from the property title. This is a sobering thought.

What should be done when buying a house together?

The emphasis is on getting it right at the outset.  It may seem cold and clinical to talk about who should own what shares when buying a house together. It is not expected that the relationship will end in tears but one has to be realistic. If you are contributing unequal shares, then have a Declaration of Trust drawn up to reflect this (assuming this is what you want). If the house has to go into one party’s name (maybe because the other cannot go on the mortgage) then consider having a Cohabitation Agreement prepared setting out your intentions as to the beneficial ownership of the property and who will be paying the mortgage, etc.

What happens if it all goes wrong?

Disputes between parties over property are brought under the Trusts for Land and Appointment of Trustees Act 1996. Generally a declaration as to ownership is sought as well as an order for sale. These disputes can be protracted and costly. They are generally dealt with in the County Court and costs orders can be made against the ‘losing party’.  Before embarking on any court proceedings legal advice needs to be sought as to the merits of any application.

The other more extreme option is to look to buy your property in Scotland. In Scotland they have the Family Law (Scotland) Act 2006 which provides that a claim can be brought on the grounds of ‘economic disadvantage’ suffered as a result of the breakdown of the relationship. No such remedy lies in English law – not yet anyway.
Some cases
There have been some interesting cases in this area, including Kernott v Jones (2011), Aspden v Elvy (2012) and Geary v Rankine (2012) for those who wish to research further.